Cherry Mobile and NVIDIA partnership unleash new tablet in Philippine mobile market, which is came out by surprise – it’s the NVIDIA Tegra Note 7 at a price tag of Php 9,999.

The Tegra Note 7’s were smooth and appealing, from the similar look, you will get an HTC look-alike thru stereo speaker holes from the top and in the bottom. The front display is in a reasonable screen but not a top notch given in its price tag. The sound quality of the speakers is extensive and not over loud.

The front display colors were good though short in number of pixels, but above anything else, it’s a hardly premium display and design.

The rear part has a plastic matte finish along with the 5MP HDR rear camera, and the silver Tegra Note 7 name tag on it.

From the rear – 5MP HDR camera with mic, not much a grand slam camera but you get some features for most Android cameras, like the HD video capture, burst photos, panoramic, timer shots, AOHDR and other settings you might use of. Sorry folks NO LED flash and that’s because of the tablet production cost.

Tegra Note 7 pen stylus and another speaker (which I think is the bass, for the improved sound quality while you’re on the gameplay).

Not long ago, Samsung and Windows Tabs (this includes Samsung Note) era were the pioneer in terms of stylus technology, though their stylus tech were pricy as it sounds in the market. What makes Tegra Note 7 interesting is that, besides on its stylish look and premium cut design, on the plus side of it, you can buy third-party capacitive stylus from Php 300 – 600 price depends of course in the name brand.

Tegra Note 7 with a rubber point with metal finished around the tip and with sufficient length for comfortably while using it. Another interesting thing about the stylus capacitive touch is the ability to pair with the Tegra Note 7. It has the cleverness intuitive attached to its Tegra Note 7’s software, NVIDIA chip has its on dedicated sensors to speed up the stylus touch this allows real-time processing and more responsive, and it is all thanks to NVIDIA DirectStylus.

The NVIDIA DirectStylus separates the rubber point touch, the fingers and the palm all in one in the software’s touch. That’s really something to NVIDIA’s processor / chip, which does proves the pressure recognition in the device. Another cool thing you can do to the stylus is to flip it over and used it as an eraser to your handwriting or artwork. But the catch is, you need to hold the tip or point for a second before you actually used the eraser, and you will know it once the circular symbol appears in the screen.

Another fun fact you can actually do besides on handwriting, is the drawing or sketch app called “Tegra Draw”. Tegra Draw much more focus on the art type app, with all those tools you can used to draw or sketch any art would you think of. The Tegra Draw has the smoothest while sweeping into curves and very fine in detail. 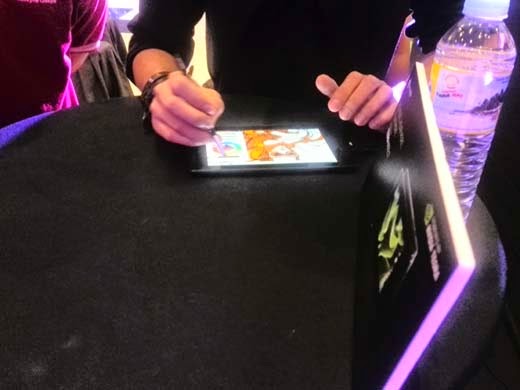 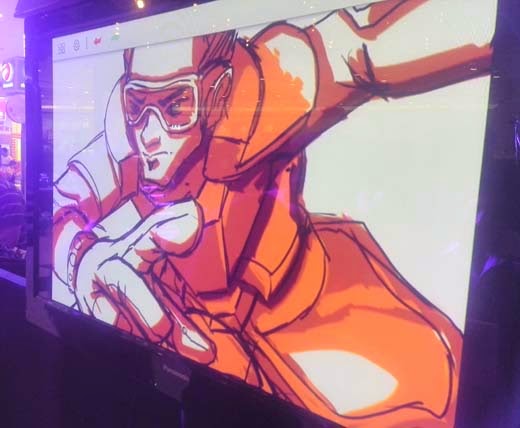 NVIDIA Tegra Note 7 is equip with 1.8 GHz Tegra 4 processor with Quad-core Cortex-A15 CPU and 72-core GeForce GPU that you can harness its potential on responsiveness and multitasking, 16GB internal storage to store apps/files, Expandable microSD card slot up to 32GB (for your movies or music files), and a 1GB of RAM to help the processor on its data/apps handling.

The NVIDIA Tegra Note 7 is running on stock Android OS 4.4 KitKat with usual apps and Play Store you can access. Tegra Note 7 is as expected particularly to gaming type of tablet.

In the mere fact, you can use its micro HDMI and plug to your big screen TV, to download and play games like Asphalt 8 or Dead Trigger 2. You can also pair it to your gamepad and take advantage to use it via web browsing or alike.

AnTuTu Benchmark can prove that this gaming tablet performs well and at its best in terms of responsiveness and no sluggish or lags in apps, web browsing or in multitasking.

The Tegra Note 7 has a 4,100 mAh battery pack that can survive in a day or two and depends upon usage. It can survive a couple of days before you can even recharge it. NVIDIA Tegra Note 7 can last up to 9-10 hours of HD video playback and 9 hours of web browsing via Wi-Fi connectivity.

If you’re looking for a good deal of tablet, it is sure that NVIDIA Tegra Note 7 is a worthy to have tablet. Along with its gaming edge tablet can do even more than just a regular tablet, plus with stylus that can do marvellous artworks and for note taking. And what’s even great and a solid-deal for this tablet, is the price for under Php 10K.